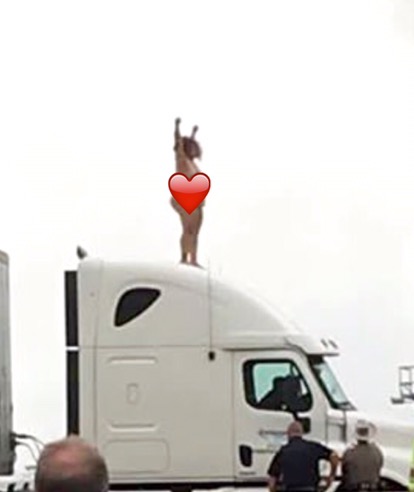 By now the world has heard of Houston, TX and the traffic distraction of the naked dancing queen. I admit I got a good chuckle out of all the Meme’s floating around the net.

Interesting though that when I think of her… I feel this overwhelming sense of not only compassion but a sense of wonder and hope surrounding it.

First I wondered how she kept her footing so well, as a larger woman myself, I know that was not an easy job, so I like to think she had some Divine assistance with that and protecting her from harm.

Second, I wonder if the surrounding motorist were pissed because she had hindered them and taken up almost two hours of their time, or if they relaxed and just enjoyed the show or stopped and prayed for her and all the children that may have caught the show.

Third, I even laughed because if you have been anywhere near Hwy 290 lately and the mess it already is with congestion and construction, it would make you want to strip your clothes off butt naked and run- not dance.

I saw the lead image from a friends Facebook page that captured the shot of the lady’s pose with her arms stretched up over her head.

Was she surrendering to the freedom she felt high above the other cars and distractions of her life, unhindered from the binding and restrictions of her clothes now shucked, and just experiencing the happiness of the breeze blowing away every care at that very moment?

That was the thought that I wanted it to be for her, for me, for everyone watching…..

But sadly, I doubt she could grasp a hold of any thoughts. Her mind was either plagued by the demons that have been raging within her or possibly the drugs that altered her sense of acceptable behaviors when stuck in traffic.

Rumors circled the net along with the meme’s that she was a psych patient that had left the hospital and other reports were that she was driving erratic and had caused two other fender benders before bailing out and baring all her goods before she climbed up that poor guys rig and began dancing to the music only she heard.

I can’t help but wonder, what music did she hear?

What message was this to deliver to us?

Those offended and pissed, where was their empathy and compassion?

All the YouTube videos, snap chats, tweets and Facebook posts swirling- but did anyone put down their phones, get out of their cars, and try to reach out to her instead of pointing and laughing?

I am not sure why this is all swirling around in my head this morning but I do know that God has a plan for this. God has a message much deeper than all the surface skin level that we all saw and the world has seen now by all the media coverage.

I believe that it just isn’t Houston, but the World that has a problem when others are not led to compassion or empathy for those hurting, regardless how they choose to express that pain.

Dancing Queen, whomever and wherever you are I pray that in that moment of arms held high that you felt God in that breeze that hit you girl! I pray that the demons or addiction or just the mental break from whatever life’s events caused you to do this that you will come to know Christ, be delivered, set free and be renewed in your mind, and come to have the mind of Christ. I pray for the world watching that didn’t reach out or respond with empathy and compassion would get a good heart check. I pray for all the little eyes and others that just didn’t need to see all this that you would protect their minds. I pray that I will keep seeking the lessons you are wanting to share with me over all this.  Lord, forgive me when I only think of myself- let me be led to reach out more.
~XXOO Michelle Bollom

The way we live is the testimony of what’s in our heart.

“We may think we are doing the right thing, but the LORD always knows what is in our hearts.” Proverbs 21:2 (CEV)

“Something has been occurring within the body of Christ for some time and it saddens me deeply. Now more than ever, I am seeing a continually tearing down of one another from within Christendom.  Its destructive force is the ugly monster of jealousy.  I am especially amazed how prevalent this is among women in ministry.  […]